Investing in next-level biosecurity for your farm.

D&D rooms, also known as fumigation rooms, are an important part of most farms’ biosecurity protocols. Items acting as fomites, something that acts as a carrier for a pathogen, enter these rooms and are exposed to disinfectants being emitted by a “fogger”.

Research has shown on average only 50 percent of the surface areas of some of the items are being touched by the disinfectants. Since it only takes one pathogen to cause an outbreak on a farm, it is crucial that this failure in biosecurity be addressed. Studies have also shown that pathogens do in fact travel on fomites, meaning outbreaks can and will occur if this issue does not get fixed.

Because of this issue, and the detrimental effects that pathogens have on animals worldwide, the Bio-Box was developed.

Why Choose the Biosecurity Box?

Easy and safe to use.

Along the same idea as the Bio-Box for improving a facility’s biosecurity, the Bio-Barrier 360 allows for items to sit comfortably and securely on one of their corners while the item is then rotated 360 degrees as it is misted with a disinfectant.

Countless studies have proven that chemicals are effective against pathogens when direct contact is made between the disinfectant and the disease causing agents. The Bio-Barrier 360 improves the rate-of-contact between the disinfectant and the pathogens. Our product has the potential to disinfect items entering the farm much quicker and more efficiently than any previous known methods.

Not only will the disinfectants now be able to reach all surfaces, but this method has the potential to save money for the producer in the long run by standardizing application rates. This solution is safer, more effective, and more reliable than hand spraying all of the items themselves, therefore making the Bio-Barrier 360 a key element for your farm’s biosecurity.

Customizable for your farm. Improve your facility’s biosecurity by eliminating pathogens from all sides. 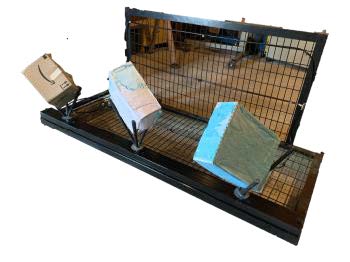 Rest one corner of the supply filled boxes in the middle of the prongs.

Fill the bucket with a disinfectant/water mixture and secure the lid with the pump and tube attached.

Plug the pump and prong motors into an electrical outlet and the disinfectant process will begin.